Update on the anti-heath care nominee for Health and Human Services, a tweet you’ll want to keep on file, and our first holiday gift guide

Greetings and Salutations
This week’s TrumpShaker includes an update on the anti-heath care nominee of Health and Human Services, a tweet you’ll want to keep on file, and our first ever holiday gift guide. If you like what we do, you can use the buttons below to share it or just tell your friends to sign up!

Holy M.Night Shyamalatrump, It’s a Twist!
Like every good thriller, the 2016 election had one last shocking surprise. It’s one thing for the loser of an election to claim the election was rigged, but it takes a real evil genius to claim he won a rigged election.

Last Sunday, Trump tweeted, “In addition to winning the electoral college in a landslide, I won the popular vote if you deduct the millions of people who voted illegally.”

In just that one sentence manages to accuse Democrats of cheating, to say that Democrats are incompetent cheaters because they still lost, and to not see an issue in his winning an election in which he says there are millions of illegal votes. That’s a lot of gymnastics for a septuagenarian.

Trump will have some competition for the gold though. As I type, the Michigan legislature is pushing forward with strict voter ID laws because of the apparent threat to democracy of illegal voters in The Wolverine State, while concurrently the Michigan Attorney General is attempting to stop Jill Stein’s recount because nothing could possibly have gone wrong.

The President-elect of the United States tweeting from his fantasy world has implications for us in the real world. As a poor CNN reporter found out, a lot of people believe Trump. This lays the groundwork for an Attorney General, who is hostile to the Voting Rights Act, and a Congress and numerous state legislators who have fallen in love with creating new creative roadblocks to voting to do some real damage to democracy.
More Information
Washington Post: Trump gets four Pinocchios for his illegal voter claim

It’s Only a Flesh Wound 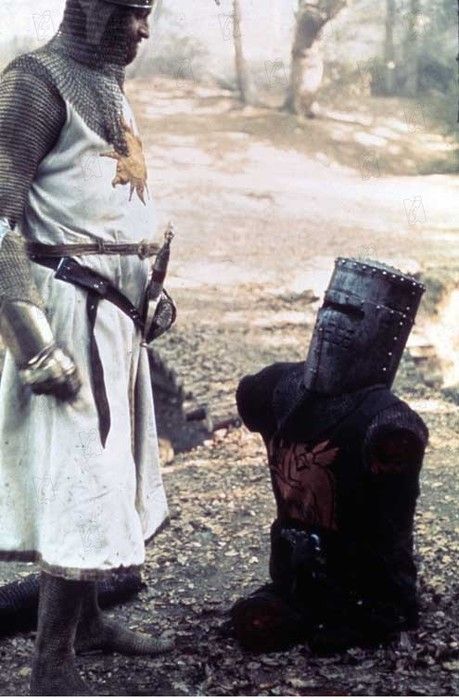 Unfortunately, I think I’ll be using this image a lot for the Affordable Care Act in the coming months.

When Trump reached under Florida and asked the United States to turn its head and cough, Representative Tom Price came falling out of Georgia for Secretraty of the Department of Health and Human Services. This is the department that oversees the Affordable Care Act.

We all have our pet peeves. Me? I hate people talking in movies. Representative Price? He really hates when people get free health care. To each their own. He’d like to dismantle Medicaid (health care for those living in poverty), privatize Medicare (for those 65 and older), and don’t get him started on the ACA. Seriously, don’t, because he wants to get rid of it entirely.

But what about the children? He voted against expansion of the Children’s Health Insurance Program.

Paging All Doctors (Ed.: do you still get pages?)
Despite his imaging all the people living life without insurance, the American Medical Association (AMA) strongly endorsed Tom Price.

Doctors have begun to voice their opposition with open letters to the AMA and quitting the organization. The National Physicians Alliance has taken an adversarial position to the AMA and Price.

Get the paddles out – it’s time to give your advocacy heart a jump.
More Information
About Price:
Vox
The Atlantic
About doctor advocacy:
3600 Physicians sign petition against AMA
National Physicians Alliance Statement on Rep. Tom Price

Got to Be a Joker. He Just Do What He Please

In order to heal the wounds of the country, Trump set out on his Victory Tour, which is like the Jacksons’ Victory Tour, but the complete opposite. He kicked things off this week in Cincinnati and basked in the glow of his fans, attacked the media, and led lock her up chants. Yep, we’re coming together over him.

The big news was that earlier that day, he announced in Indiana that he had stopped 800 jobs at an Indiana Carrier furnance plant from being shipped to Mexico through his own force of personality and masterful negotiating.

Well, it was that and $7 million. The VP-elect, still Governor of Indiana, made a deal to provide millions in tax credits to Carrier. Carrier, a poor mom and pop trying to make ends meet, had a $7.6 billion profit last year and gave its CEO a $172 million retirement package.

That 800 jobs are now staying is great for those families, but bribing rich companies with taxpayer funds does not a successful economic policy make. Oh and by the way, Carrier is closing another factory in Indiana and still sending 1300 jobs to Mexico. So little Trumpy-Lou-Who didn’t make the Grinch’s heart grow two sizes that day.

Trump got a momentary PR win. However, for creating a scenario in which companies will now threaten to leave in exchange for taxpayer handouts, he was criticized harshly by the unlikely trio of Bernie Sanders, The Wall Street Journal, and Sarah Palin.

You know, what? I take it back. Trump got toe-jam football. If he can get those three to agree, he is bringing us together.

Perspective Stats of The Issue

Trump would have to do one Carrier-sized deal a week for 30 years to save as many jobs as Obama’s auto bailout.

If Trump did a Carrier-style deal every week for the next 4 years, he could bring back 4% of the manufacturing jobs lost since 2000.

Score Update
Hilary is now up by 2.56 million votes, which is equal to the number of all the people that went to a Kansas City Royals game last year.

53.8% of the electorate did not vote for Trump. This has made Trump angry enough to make wild accusations to undermine worldwide trust in democracy, but maybe he’ll take solace in knowing that he broke new ground.

Trump will be the first President to get less than half the vote in both the election and the primary.

If you’d like to see the insanity of the Electoral College end, go to NationalPopularVote.com

Quick TrumpShakes
Hope he didn’t give any speeches while at Goldman, because that would be bad. Trump nominated former Goldman Sachs partner, Hollywood producer, and CEO of a foreclosure machine, Steven Mnuchin, to head the Treasury. Good news is that he’ll be able to provide guidance on how to survive a post-nuclear holocaust environment as he was an Executive Producer on Mad Max: Fury Road.

You get a conflict. You get a conflict. We all get conflicts! Trump nominated Elaine Chao for Transportation Secretary. People agree she is qualified, which is unfortunately newsworthy. More newsworthy though is that she is married to the Senate Majority Leader Mitch McConnell and he has stated he will not recuse himself from her nomination.

Freedom of Tweets. Trump took on the First Amendment in last week’s tweets. He said that flag burners should be jailed or lose their citizenship. He also directly attacked a CNN reporter for challenging his illegal votes claim.

They’re Grrreat! Kellogg’s took a stand and pulled advertising from Breitbart, who has in turn called for a boycott of Kellogg’s. Show your support and pick up some Apple Jacks today! I’m fine if Kellogg’s caves, as long as they only run this ad on the supremacist friendly website.

The Upside Down
This is Not Your Reality
Newsweek shared the drafts of the Hilary Wins articles from leading journalists.

This is Your Reality
The New York Times needed to write a story about a small pizzeria called Comet Ping Pong that is under attack by some Trump supporters because they believe it’s the base for a child abuse ring run by Hilary Clinton and John Podesta.

Like a Bull in a  . . . (sometimes headlines just write themselves)
President-elect Trump had a phone call with Taiwan’s president. This is the first time since 1979 we’ve had direct Presidential contact with Taiwan. We’ve taken almost four decades off from dishing with them since China doesn’t recognize Taiwan’s independence and they’re kind of a big deal in that neighborhood.

Was this a new thought-out strategy towards the complicated geopolitics created by Nixon’s One China policy? Nope, it was likely just to follow up on a hotel development inquiry by the Trump Organization. Trump’s folks denied any business interests in Taiwan. However, Trump Hotel’s Global Director for Asia posted on Facebook on October 15 that she was in in Taiwan on business, and “OMG I’m in Taipei now and love it here.” Facebook giveth and Facebook taketh away.

In other destabilizing Asia news, Trump also had a pleasant chat with Philippines President Duterte, just one authoritarian to another. Duterte recently called our current President a son of a whore . . . twice!  Duterte said that on the call Trump wished him success on his drug crackdown. Duterte’s primary Just Say No policy is to encourage extrajudicial killings of suspected dealers and drug users by police and vigilantes. In his first 60 days, over 2000 people were killed and he offered cash rewards for citizens that killed alleged dealers. This is where I usually put a sarcastic comment, but I’m done.

Featured Article of the Week
The Cinemax Theory of Racism – A helpful analogy for explaining to Trump voters “who aren’t racist” that they still voted for racism.

A Yale History Professor’s Powerful, 20-point Guide to Defending Democracy Under a Trump Presidency
#1 Do Not Obey in Advance
#7 Stand Out
#11 Make Eye Contact and Small Talk
#20 Be a Patriot

A new website put together by “a collective of concerned and angry creative and technical folk,” can direct your Trump rage into something positive. The site shows you a Trump quote and then directs you to a non-profit you can support to combat whatever garbage came out of his mouth.

For example, there will be Trump quote like, “We have to talk to them, maybe in certain areas, closing that Internet up in some ways. Somebody will say, ‘Oh freedom of speech, freedom of speech.’ These are foolish people.” Below the quote is a link to the Electronic Frontier Foundation

Last issue we touched on Trump’s serious conflicts of interests with his businesses. After no doubt reading The TrumpShaker, Sen. Ben Cardin from Maryland wrote a resolution urging Trump to comply with the Constitution.Find your rep at usecalltoaction.com to tell them to support this.

The TrumpShaker Holiday Gift Guide!
If you have the anti-fascist who has everything, consider this new t-shirt from Jezebel.It lists every name the great writers at Jezebel have called Trump since the primaries began.  From a “An Ambitious Corn Dog That Escaped from the Concession Stand at a Rural Alabama Fairground, Stole an Unattended Wig, Hopped a Freight Train to Atlantic City, And Never Looked Back” to a “Monument to Human Hubris Crafted out of Rotting Spam”, you can wear them all with pride!
Outraged? Please Share: